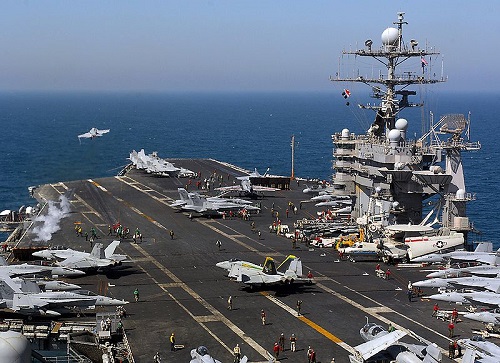 Which Branch is Right for Me?
By Kevin Flynn

Assuming you have done your due diligence that you want to join the military, the next decision is what branch of the service is right for you. In the last decade the services have worked together much more than in the past.

Joint commands, made up of Army, Navy and Air Force personnel operate around the world. Unlike previous conflicts, in Iraq and Afghanistan, the Army, Navy, Marines and Air Force have put common goals ahead of inter-service rivalries. With that said, there are still major differences among the services. Learning about the traditions and cultures of each branch is a good way to figure out the right fit.

Even within a branch of the military there can be vast differences between communities within the service. For example, consider the Navy.

Learn more about joining the Navy and their educational opportunities!

Within the Navy there are many communities- surface warfare, special warfare, aviation, and submarines. There are also support communities- such as medical or supply corps.

In the Navy there are big differences among the aviation, submarine, and surface fleet officer communities. The differences can be stark, from the pay to the level of danger and excitement. Each community is different and has pros and cons.

Consider for example, Naval Aviation. In Navy Air, there is a unique culture. It attracts Alpha personalities.

There is an element of danger and daring. Flight crews have a mission and job that can be exciting. In addition there is an expectation that you must do your job really well.

A mistake in the air can be catastrophic, and so Navy Air has developed a culture of safety, a culture of training and low tolerance for operational mistakes. It takes a special person to fly a plane, to land it on the deck of a ship, and to do it again and again, for a six month deployment. In general Naval Aviation is a work hard, play hard environment.

There are incredible people involved in aviation; they accomplish their missions at Mach speed. There is little margin for error and they deal with tremendous amounts of stress.

In the past there was a culture of playing hard to relieve that stress. Today the military, all branches, all communities, have cracked down on how sailors blow off steam.

Naval aviation has always been a collection of types- some outgoing, some reserved. It is big enough that almost any personality type can find a group of like minded friends. Really the only constant required is competence.

Some Pros: When a pilot is actually flying it is pretty awesome. It is an exciting experience taking off from the ship, it is sometime a blast flying through the clouds, and is thrilling landing on a ship.

A mission can last a few hours, and during that time sometimes pilots live life to the extreme. There is no other job like it in the civilian world. Flying can be wonderful, with indescribable views. Flying fast in a jet can be exhilarating.

There is generally a lot of camaraderie, a mix between being on a sports team and a fraternity. The pay by military standards is high. After a pilot leaves the military they can continue flying – it is a marketable skill.

Aviation also can be a place where sailors learn responsibility, leadership and management skills valued in the civilian world. Finally, a lot of the bases are in nice areas, San Diego, and Virginia Beach for example.

Some Cons: There is a long time commitment for many aviation jobs. Pilots generally must serve for ten years including flight school.

Deployments are six months long, and can be hard on family life. Missions are fundamentally dangerous, even training flights can end up being life threatening situations. It is an up and out organization, meaning if you are in the bottom of your peer group you can be removed from the service. This can be bad if you are more than half way to retirement.

In addition to flying aviation, officers hold additional responsibilities that are sometime mundane. For people who like to set down roots, sometimes they are disappointed to learn their new assignments involve moving to a new state or even overseas.

Finally within Aviation, the aircraft assignments can dramatically impact happiness. There is a big difference between flying an F-18 fighter and an E-2 Hawkeye. One performs daring attack missions; the other has a much more command and control mission, and flies a race track pattern for hours on end.

Aviation has a bit of a rivalry within the Navy. Surface warfare officers, known as black shoes to the aviators because of the color of the shoes they wear, are sometimes perceived to be jealous of the pilots. Part of it is that flying is glamorized in movies and on TV. Part of it comes from the perception that pilots have easier jobs, shorter hours, and more fun than other officers aboard ship.

This is not to imply the vast majority of naval officers don’t get along. It is just something that occasionally surfaces and is something to consider when joining the service.

Learn more about joining the Navy and their educational opportunities!

The fact that pilots must intently concentrate while in the air to avoid any unnecessary mishaps, probably influences a more relaxed attitude on the ground. For the most part, aviation is reasonable and, while professional, squadrons tend to be more flexible on matters that are not ‘life and death’ than other communities. Something to think about is when a pilot or flight officer joins a staff commanded by non aviation officers, they may be surprised when the new command is not as reasonable. The pilot may even sense some jealousy or even contempt for their community. This is rare, but is occasionally a problem.

With so many pros and cons it is difficult to know if Naval Aviation is the correct fit. A good way to help you decide is to learn as much as possible about being a pilot.

A great way to do this is to take flight lessons. Lessons can expose a person to the challenges and benefits of this line of work. Firsthand experience with flying can either wet a person’s appetite for more or scare them straight into another line of work. Some people think being a pilot will be like playing a video game. Flight lessons will reveal the true challenge of flying- dealing with three dimensions- dealing with multiple gages, with air traffic, with weather. It can be a challenge, but to some this challenge is extremely compelling.

You can lose yourself in the moment- live in the present, just think about flying, rather than worrying about the past or the future. To some this is therapeutic, and a great escape from everyday worries. It is also somewhat physical; you use your feet, your arms, and your eyes to keep the plane steady and on course. There is something cool about that. How much desire a person has after taking lessons can help you decide if this is a hobby or a way of life.