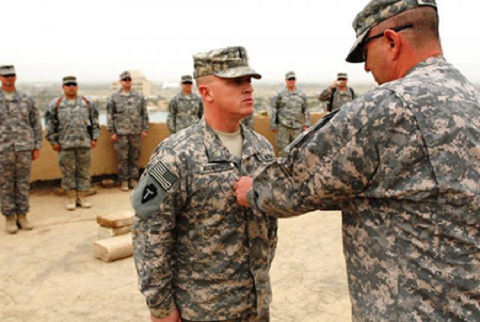 One of the best things about the Army is if you dedicate yourself to being the best Soldier you can be, by taking advantage of additional training and schooling opportunities, this can often accelerate your promotions. These promotions will lead to a higher pay rate which in turn will help provide financial security for you and your family. Below is a list of the Army ranks for Enlisted Soldiers, Warrant Officers, and Officers. These Army ranks are from lowest to highest.

(Addressed as “Private”)
Lowest rank: a trainee who’s starting Basic Combat Training (BCT). Primary role is to carry out orders issued to them to the best of his/her ability. (PVT does not have an insignia)

(Addressed as “Private”)
PV2s are promoted to this level after one year—or earlier by request of supervisor. Individual can begin BCT at this level with experience or prior military training. Carries out orders issued to them to the best of his/her ability.

(Addressed as “Specialist”)
Can manage other enlisted Soldiers of lower rank. Has served a minimum of two years and attended a specific training class to earn this promotion. People enlisting with a four year college degree can enter BCT as a Specialist.

(Addressed as “Corporal”)
The base of the Non-Commissioned Officer (NCO) ranks, CPLs serve as team leader of the smallest Army units. Like SGTs, they are responsible for individual training, personal appearance and cleanliness of Soldiers.

(Addressed as “Sergeant”)
Typically commands a squad (9 to 10 Soldiers). Considered to have the greatest impact on Soldiers because SGTs oversee them in their daily tasks. In short, SGTs set an example and the standard for Privates to look up to, and live up to.

(Addressed as “Sergeant”)
Also commands a squad (9 to 10 Soldiers). Often has one or more SGTs under their leadership. Responsible for developing, maintaining and utilizing the full range of his Soldiers’ potential.

(Addressed as “Sergeant”)
Key assistant and advisor to the platoon leader. Generally has 15 to 18 years of Army experience and puts it to use by making quick, accurate decisions in the best interests of the Soldiers and the country.

(Addressed as “Sergeant”)
Principal NCO at the battalion level, and often higher. Not charged with all the leadership responsibilities of a 1SG, but expected to dispatch leadership and other duties with the same professionalism.

(Addressed as “First Sergeant”)
Principal NCO and life-blood of the company: the provider, disciplinarian and wise counselor. Instructs other SGTs, advises the Commander and helps train all enlisted Soldiers. Assists Officers at the company level (62 to 190 Soldiers).

(Addressed as “Sergeant Major”)
SGMs experience and abilities are equal to that of the CSM, but the sphere of influence regarding leadership is generally limited to those directly under his charge. Assists Officers at the battalion level (300 to 1,000 Soldiers).

(Addressed as ” Command Sergeant Major”)
Functioning without supervision, a CSM’s counsel is expected to be calm, settled and accurate – with unflagging enthusiasm. Supplies recommendations to the commander and staff, and carries out policies and standards on the performance, training, appearance and conduct of enlisted personnel. Assists Officers at the brigade level (3,000 to 5,000 Soldiers).

SERGEANT MAJOR OF THE ARMY

There’s only one Sergeant Major of the Army. This rank is the epitome of what it means to be a Sergeant and oversees all Non-Commissioned Officers. Serves as the senior enlisted advisor and consultant to the Chief of Staff of the Army (a four-star General).

The Army Warrant Officer is an adaptive technical expert, combat leader, trainer, and advisor. Through progressive levels of expertise in assignments, training, and education, the Warrant Officer administers, manages, maintains, operates, and integrates Army systems and equipment across the full spectrum of Army operations. Warrant Officers are formally addressed as either Mr. or Ms.

Appointed by warrant from the Secretary of the Army. WO1s are technically and tactically focused officers who perform the primary duties of technical leader, trainer, operator, manager, maintainer, sustainer, and advisor.

Chief Warrant Officers become commissioned officers as provided by the President of the United States. CW2s are intermediate level technical and tactical experts who perform increased duties and responsibilities at the detachment through battalion levels.

Advanced-level experts who perform the primary duties that of a technical and tactical leader. They provide direction, guidance, resources, assistance, and supervision necessary for subordinates to perform their duties. CW3s primarily support operations levels from team or detachment through brigade.

Senior-level experts in their chosen field. They primarily support battalion, brigade, division, corps, and echelons above corps operations. CW4s typically have special mentorship responsibilities for other WOs and provide essential advice to commanders on WO issues.

Master-level technical and tactical experts that support brigade, division, corps, echelons above corps, and major command operations. They provide leader development, mentorship, advice, and counsel to WOs and branch officers. CW5s have special WO leadership and representation responsibilities within their respective commands.

(Addressed as “Lieutenant”)
Typically the entry-level rank for most Commissioned Officers. Leads platoon-size elements consisting of the platoon SGT and two or more squads (16 to 44 Soldiers).

(Addressed as “Lieutenant”)
A seasoned lieutenant with 18 to 24 months service. Leads more specialized weapons platoons and indirect fire computation centers. As a senior Lieutenant, they are often selected to be the Executive Officer of a company-sized unit (110 to 140 personnel).

(Addressed as “Captain”)
Commands and controls company-sized units (62 to 190 Soldiers), together with a principal NCO assistant. Instructs skills at service schools and The United States Army combat training centers and is often a Staff Officer at the battalion level.

(Addressed as “Major”)
Serves as primary Staff Officer for brigade and task force command regarding personnel, logistical and operational missions.

(Addressed as “Lieutenant Colonel ” or “Colonel”)
Typically commands battalion-sized units (300 to 1,000 Soldiers), with a CSM as principal NCO assistant. May also be selected for brigade and task force Executive Officer.

(Addressed as “Colonel”)
Typically commands brigade-sized units (3,000 to 5,000 Soldiers), with a CSM as principal NCO assistant. Also found as the chief of divisional-level staff agencies.

(Addressed as “General”)
Serves as Deputy Commander to the commanding general for Army divisions. Assists in overseeing the staff’s planning and coordination of a mission.

(Addressed as “General”)
The senior level of Commissioned Officer typically has over 30 years of experience and service. Commands all operations that fall within their geographical area. The Chief of Staff of the Army is a four-star General.

GENERAL OF THE ARMY (GOA)

This is only used in time of War where the Commanding Officer must be equal or of higher rank than those commanding armies from other nations. The last officers to hold this rank served during and immediately following WWII.

Information provided by the U.S. Army. To view the symbols and insignia see below: