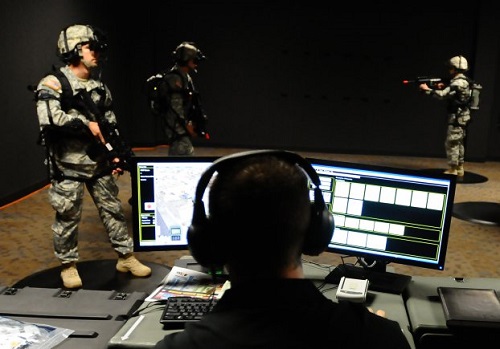 February 29, 2016, by D.M. McCauley – All of the training in the world cannot prepare you for the real experience and pressure of performing your duty under fire. You can never be 100% sure of how you will react until you’re actually there in the moment.

Bullets whiz past your head, fragmenting the brick wall behind you. A few feet away a member of your squad is hit by enemy fire and calls out for help. The deafening sound of an improvised explosive device sends terrible shivers down your spine. Only none of these things actually happened.

This is where virtual reality enters the picture. Technology like the Oculus Rift stands to capitalize on a longstanding effort by the military to develop realistic and engrossing simulations. The US Army currently has their own proprietary technology called the Dismounted Soldier Training System. This high tech virtual reality system allows soldiers to engage in teamwork and tactics scenarios in a 3D generated virtual environment. The DSTS was revealed back in 2011, and virtual reality has changed much since then.

The rapid evolution of the technology has led to complex body tracking systems and increasingly accurate simulations. The PARASIM Virtual Reality Parachute Simulator is one part of this. Participants are suspended above the ground and participate in simulated free-fall and static line training scenarios. This serves as another way to give soldiers hands-on training before ever catapulting themselves out of a perfectly good airplane. Yet these simulations ultimately amount to engrossing video games.

The ability to make these simulations as realistic as possible can provide enormous value in a different way. Conversely, the suspension of disbelief is hampered when unrealistic 3D models are used to represent the horror of warfare. While the simulation may feel immersive, 3D models have an artificial otherness that is easy to discern.

Where I believe the most significant advances may come is from the realm of virtual reality cameras. These VR cameras are being embraced by a subset of journalists, and this footage excels in conveying the harshness of reality. This footage can then be combined into a virtual reality depiction of real events. This is best evidenced by the efforts of RYOT, a group that video recorded the aftermath of the Nepal earthquake using VR cameras. Viewers are given a firsthand experience of the disaster that claimed more than 8,000 lives.

Training and gaining experience through a 360-degree recorded world is the next step. It’s a complicated process, but this is the only way to truly experience virtual reality and not an attempted 3D representation that is akin to a video game.

Using this, soldiers could visit real war zones torn apart by conflict. Virtually experiencing reality introduces a visceral element that simply isn’t possible with 3D models and fictional approximations. This is the best way of introducing and preparing these soldiers for the horror and humanity of the modern battlefield. Virtual reality cameras represent an important chance to immerse, teach, and help prepare our servicemen and women. Beyond this, it represents an opportunity to engender greater empathy and understanding across borders and cultures.