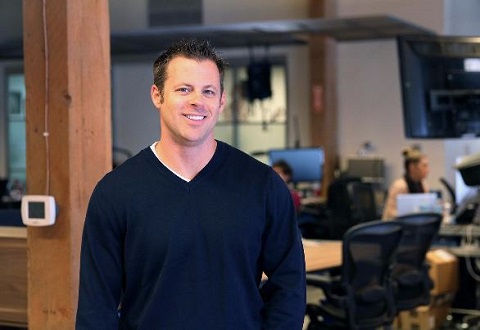 November 11, 2015, by D.M. McCauley – This Veteran’s Day we are joined by Army Veteran and CEO of Ustream, Brad Hunstable. He is a graduate of the United States Military Academy at West Point, and served as an officer in the United States Army before becoming an entrepreneur. Ustream is a video streaming service with more than 80 million viewers and broadcasters worldwide, and is the live streaming service for the PlayStation 4.

Brad co-founded Ustream more than six years ago with a vision to bring live broadcasting technology to the entire world; Ustream was originally created to connect military service members to family and friends across the world. Since then, the company has established itself as a socially fueled communications platform for businesses, non-profit organizations, and individuals of any size to easily reach an infinite audience and share experiences in real-time.

Thank you Brad for speaking with us today. Many people are already familiar with your military background. Can you tell us more about why you chose the military over a different career path?

Brad: I grew up in a small town in Texas and always knew I wanted to dedicate a portion of my life to public service. As a sophomore in high school, I discovered West Point. I was immediately drawn to the tradition, the leadership training and the impressive academics. I never even visited, I knew it would make me better. Once accepted I just showed up because my feelings were so strong. After West Point, you are required to serve a minimum of five years on active duty in the Army. I spent four years practicing and studying leadership at the academy and took those skills to the Army as a young Army officer.

You’ve previously mentioned that you created Ustream to connect military families during deployment. Before that service existed, what difficulties did your family face trying to stay connected while deployed?

Brad: Being deployed away from your family and friends adds to an already stressful work environment. When I joined the Army there really wasn’t a way to communicate back home or watch the most important events of your kid’s lives. Soldiers and sailors around the world miss soccer games, birthdays and graduations. We wanted to use software and technology to bring them home, even if only through video. Video is a powerful emotional medium.

Why did you decide to become an entrepreneur and how did your military experience help you accomplish that?

Brad: I love creating products. As a young boy before the internet, I ran a successful BBS (Bulletin Board Service) which essentially was like a small internet on my computer. That same desire to create and build drew me to the military. What’s interesting is that most entrepreneurs start by seeing a market opportunity and then learn how to build a universal problem-solving filter/approach as they go. I truly believe that the military is the ideal process-focused training for today’s entrepreneurs. Knowing how to apply your core values to tactical situations in the “fog of business war” is much the same.

What was the greatest lesson you learned from your time in the Army?

Brad: Never quit. The Army and West Point teach you that there is always a solution as long as you stay in the fight. Starting and succeeding in a company is similar. You need to enter your offensive knowing you’ll gain new data while you’re in it, and that if you’re doing it right, you’ll likely end up somewhere different than where you expected.

What accomplishment in the Army are you the most proud of?

Brad: I really enjoyed helping young soldiers who came from a challenging background realize their full potential. The military is unique in that we come from such diverse conditions and value systems. Being able to broaden a young soldier’s perspective to a higher level of professionalism and work ethic and then see them excel was incredibly rewarding.

Looking back on your Commission, what piece of advice would you give today’s service members and veterans?

Brad: Camaraderie with your fellow soldiers and officers is the most rewarding and important aspect of your experience. Adapting to embrace and support them will make you a better soldier, a better person, and will be the thing you look back in with the most pride.

In what ways have you accomplished your goal of connecting military families?

Brad: The goal with Ustream was to create a more connected and transparent world, and I really feel like we are on our way. At first, we started helping consumers stream live, and then realized the bigger chance to move the needle was helping brands and broader organizations power media and business video. Working with NASA to promote space exploration has been a really proud project for us.

What is the next step for Ustream?

Brad: Next-steps? We’d love to live stream one of the debates, improve connectivity between remote employees worldwide, and broadcast a space mission to Mars entirely live.

Thank you to Brad and to all veterans and active duty servicemembers across the globe. May you have a wonderful Veteran’s Day, and be surrounded by the ones you love. Your valued service is a credit to your courage and dedication.