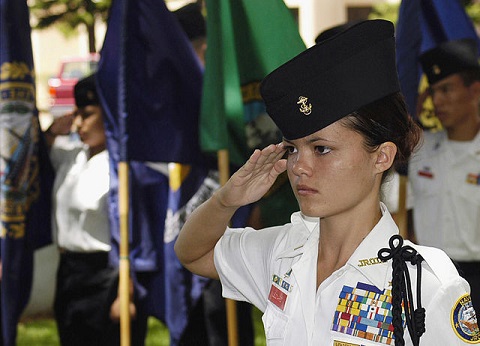 July 21, 2016, by Marlena Stoddard – When you think of your own military experience, images of Army, Navy and Marine officers might come to mind. These officers are all adults, but they often start their careers earlier in ROTC and JROTC programs. The JROTC program is offered in certain high schools where kids learn about potential military career, life and other options. Whether you want your teenager to join the military, encouraging them to join a JROTC program in high school will probably benefit them in the long run.

Just like the military, JROTC is more than learning how to stand, march and follow orders. In fact, it’s built primarily on personal growth. Your teen will learn about self-esteem and leadership roles. Activities, curricula and other resources will cover life lessons besides the basic military information. Regardless of the teen’s chosen career path, they’ll have a well-rounded personality that strives for perfection each day. They will be prepared for wherever life takes them, whether that’s an illustrious military career or something else entirely.

Teenagers might be under the impression that a commitment is made to the military once you agree to a JROTC program. In fact, this concept can’t be farther from the truth. Although many teens directly enter the military after graduating high school, there are many other people who go to college for other career pathways. The most important thing about JROTC is that it creates options, as it builds character in each member to be able to do almost anything.

A major perk of JROTC is the cost. Military and school officials usually balance the main costs into local budgets. Your teen will only need to pay for some basic items, such as uniform rentals and accessory purchases. If you enrolled your teen in a military boarding school, like Admiral Farragut Academy, the cost would be comparable to a year at college. Ideally, research both options for your child before any decision is made. JROTC has built many stellar citizens and military officers in the past.

The JROTC community is more like a family. Teens who’re struggling with classes can look to their JROTC teachers for help. This extra support through high school can make a staggering difference in many students’ lives. Teens may fail in some classes without the JROTC help. Trying the program out for at least one year will give parents a good idea of its major benefits.

The best way to learn about your local JROTC organization is by attending an informational meeting. These sessions are normally held throughout the year, especially as school ends or begins. Discuss your concerns with the officials and also involve your teenager. JROTC can be the beginning of a brilliant career in nearly any industry.