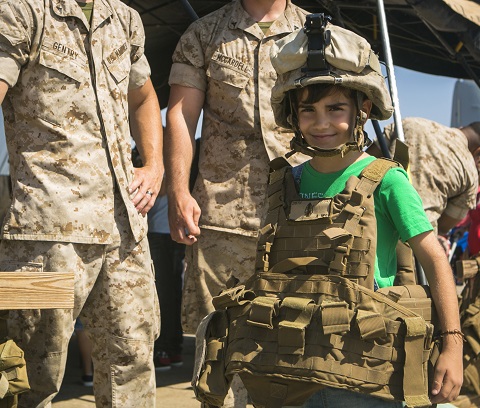 October 22, 2015, By Chris Taylor – More than any other profession, the Marines need body armor. However, their requirements for protective clothing are far more extensive than in any other profession, and the difficulties they have faced in finding suitable body armor stretch back many years. One of the main problems facing Marines is the weight and bulk of armor. Making bullet proof vests as thin and light as possible is the goal of every body armor manufacturer, yet there are few other occupations that need it as badly as the Marines.

Having light and flexible armor is not enough however, as it most also stand up to the rigors of the job, support equipment unique to Marines, and above all be as protective as possible. All of this combines to make difficult problems for body armor manufacturers to overcome, yet it is crucial that they do so.

Nevertheless, providing Marines with lightweight armor is of the utmost importance, as many already carry great amounts of equipment. For example, many Marines have traditionally carried batteries in addition to their equipment and body armor. This led one team of researchers to develop a hard armor plate that has a battery integrated, saving space and weight for Marines. It is these areas of research that provide the most immediate benefit to Marines.

Another area of development that will directly benefit Marines is in making augmentable vests and corresponding equipment. For example, the lack of shoulder protection has often been criticized by members of the Armed Forces. Some development teams have taken this complaint and developed armors that can be equipped with optional shoulder straps, making armor more adjustable and more comfortable.

One of the greatest problems facing Marines is the environments they serve in. Many of these bring with them additional obstacles that may not have been considered; for example, the US Navy advised that Marines may benefit from wearing lower levels of protection, as it would reduce the weight of their vests. However, where explosives and high caliber weapons are so common, this is simply not feasible, and high levels of protection are vital.

Nevertheless, the development of the less protective Scalable Plate Carrier came about from a desire to create armors that were suitable for the difficult terrain and conditions of Afghanistan, and the Marine Corps development of improved models of their armors follow in this vein. Making armor lighter and thinner allows it to be much more comfortable, which is incredibly important for Marines. One of the main problems many faced was that their armor got in the way of their equipment, and some would loosen their vests to better accommodate their weapons. This meant that they were not protected properly, which was naturally a major problem.

This raises the other issue of sizing and fitting, which is a problem common to body armor wearers throughout the world. Having armor that does not fit you properly can be uncomfortable and distracting, which is an incredibly serious problem in the high-risk environments Marines serve in. Furthermore, ill-fitting armor may not protect the wearer properly. This issue- as well as all the others mentioned- are common throughout the body armor industry. However, the dangerous and difficult tasks Marines are expected to carry out amplify the severity of these problems, and highlight just how much is expected of these brave men and women.

There have been efforts to counter this however, as the Military and body armor manufacturers have worked together to survey and study Marines. Body armor is currently designed to fit the vast majority of Soldiers, yet there are and will always be those for whom it simply does not fit. By studying and surveying these servicemen and women, manufacturers have identified key areas of body armor that need to be improved, as well as designing new sizes that can be made available. This ensures that all Marines are protected to the highest possible standard.

Marines are expected to perform incredibly difficult tasks, in incredibly hostile environments. This refers not only to the threats they face, but the very conditions inherent to the places they serve in. Their requirements for body armor make it all the more difficult to keep them properly protected, as armor needs to be of the highest protection, but comfortable and lightweight enough to allow Marines to perform to the best of their ability.

Tremendous strides have been made in the field of body armor, all with an emphasis on making Marines as comfortable and protected as possible. This has led to some interesting developments, as mentioned above. However, there is a great deal more that can be done, and by raising awareness of the difficulty these brave men and women face, more can be done and more effort expended in improving their situation.