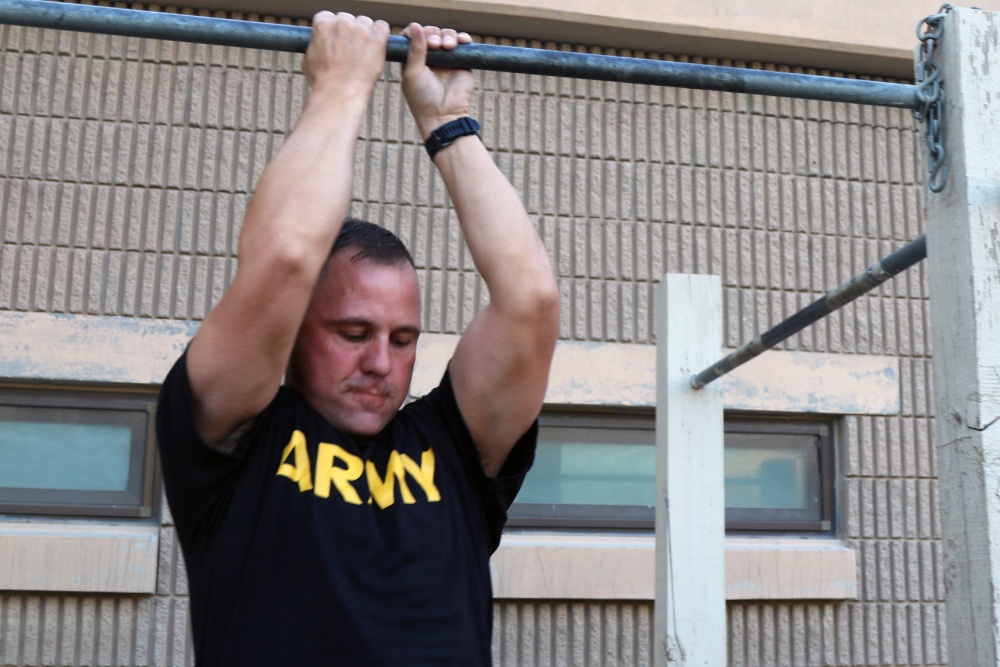 More information will be required over the next year to assist with making reliable decisions regarding the Army Combat Fitness Test.

“The Army Combat Fitness Test is very good for the Army, and it’s something we need … to look at the holistic health of individuals and how we are going to be highly trained, disciplined, fit soldiers,” said Sgt. Maj. of the Army Michael Grinston in an online question and answer session about the new fitness test.

The last six years of research pulled from veterans, national partners and physical fitness experts from civilian and military academia from across the armed services.

“I don’t think people will clear out. This test is made for people who are used to maxing the test,” said Staff Sgt. B. Hardy, a level two ACFT trainer for 38th Infantry Division’s headquarters battalion. “The new Army Combat Fitness Test is designed to pass, but to max the test takes great effort and training. The new standards force lifestyle changes and encourage working toward whole-body physical fitness.”

The U.S. Army officially fielded the new test this October and which can be administered to 64 people with 16 lanes ranging from 50 to 70 minutes.

The Army is considering how to integrate enablers like occupational health therapists, registered dieticians or a strength and coordination coach into units.

“The grader reinforces training how we fight by calling a safety stop if a soldier has improper form during the test. This prevents injury and encourages proper training,” said Hardy.

The three repetition maximum deadlift, a testable exercise required for the alternate assessment, strengthens back and leg muscles while emulating the proper form for lifting heavy loads from the ground.

Test participants move through the lanes with their assigned grader along with the rest of the squad sized element keeping the overall time to a minimum.

“Not counting the prep drill or the cooldown, you’re looking at roughly 35 to 36 minutes of actual exercise time you will be doing and about 16 minutes of rest time in between,” said Sgt. Maj. Edward Mitchell, Center for Initial Military Training. “So, if you look at it all together, it’s about 51 minutes of exercise.”

The standing power throw tests quick, explosive movements needed for quickly helping yourself or a buddy over an obstacle.

The hand-release push-up provides training for evasion movements, moving obstacles or disabled vehicles, necessary skills needed while firing a weapon in combat, and for person-to-person combat.

Another required exercise for alternate assessments includes the sprint-drag-carry testing the ability to react quickly.

The sprint-drag-carry is necessary for the alternate assessment practicing soldiers’ reactions during combat to direct and indirect fire, extracting casualties and carrying them to safety.

In combat and training, soldiers need grip, arm, shoulder and trunk strength for climbing, descending and traversing the terrain. The leg tuck event tests these capabilities.

During the test, soldiers fill out their data with a pencil and carry the card through the lanes until the next event when the grader takes the card and records the soldiers’ scores and returns it to the soldiers.

If on profile, soldiers still must pass an aerobic assessment, deadlift and the sprint-drag-carry.

Equipment fielding is ongoing, and battalion commanders guide fielding based on geography and unit mission when determining how that looks.

In the meantime, Army leadership trusts the noncommissioned officer corps to push their imagination on implementing training.

“Hey, guess what, ain’t no need to talk about the ACFT. I just need you to talk about how you’re getting out there and training for it,” said Mitchell.