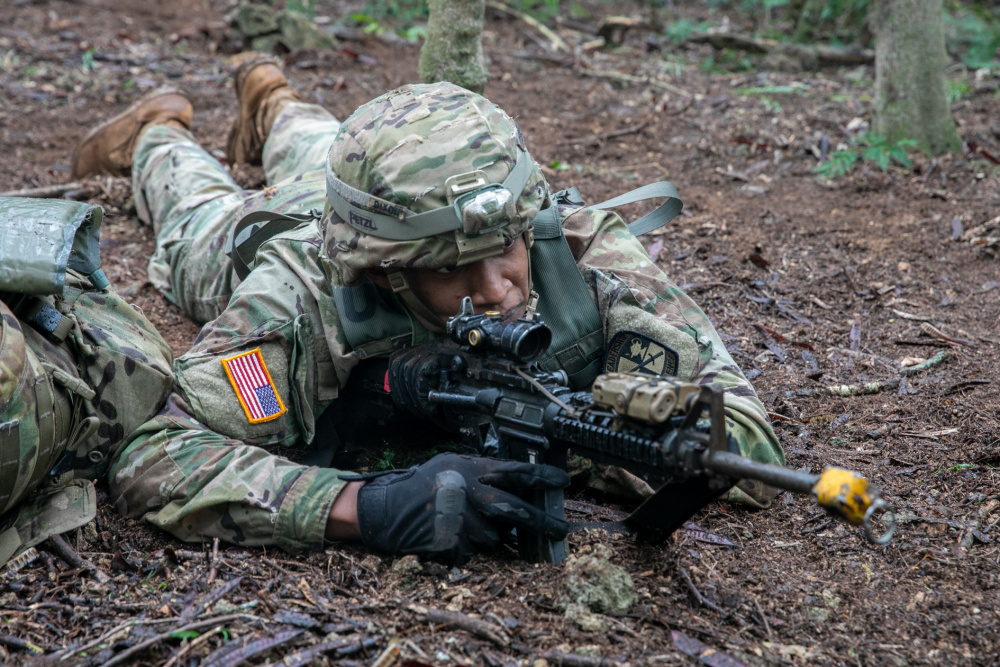 DECEMBER 9, 2020 – Former 25th Infantry Division Soldiers, now cadets in the University of Hawaii, Manoa Army ROTC Program, had the unique opportunity to train with the same division they were most recently assigned to as enlisted Soldiers during a four-day training exercise at Bellows Air Force Station Nov. 19 to 22, 2020. Three of these former Soldiers include Cadet Mary Thompson, Cadet Carey Rock, and Cadet Kolwin Dixon.

“Compared to other ROTC programs, we really have an advantage because we are able to train on the same playing field as active-duty Soldiers,” said Thompson.

Being directly supported by active-duty units during annual training is not always available at many universities that offer ROTC programs, which is one of the reasons why Cadets like Thompson made the decision to go to UH to pursue her educational and career goals. Soldiers interested in submitting a Green to Gold packet may take this into consideration, in turn affecting their decision to move forward with the already, often daunting, process.

While the process for submitting a Green to Gold Packet can often seem challenging to both new and seasoned Soldiers, Cadet Rock, a former Staff Sgt. and motor transport operator, previously assigned to 524th Combat Sustainment Support Battalion, 25th Sustainment Brigade recommends that anyone who is interested in Green to Gold should absolutely do it and submit their packet.

“ROTC is fun and rewarding, especially when you gain new skills and overcome the challenges of adapting to a new lifestyle,” said Rock.

Dixon, a native of Oahu, and former Staff Sgt. and radio operator and repairer, previously assigned to 209th Aviation Support Battalion, 25th Combat Aviation Brigade, explained that pursuing Green to Gold at UH was the perfect opportunity since he grew up here and not only reflects love for his home but also his dedication to a life of service.
“Getting stationed in Hawaii and having my eyes opened to everything that the Army had to offer made me regret not enlisting sooner,” said Dixon. “It is an honor to be a part of the tradition that I had no idea was right here in my backyard.”

Cadet Thompson is currently a senior at UH Manoa, about to complete her master’s degree.

Cadet Rock is currently a junior at UH Manoa, pursuing a bachelor’s degree.

Cadet Dixon is currently a junior at UH Manoa, getting a master’s in computer science.

For more information on Army Green to Gold visit: https://www.goarmy.com/careers-and-jobs/current-and-prior-service/advance-your-career/green-to-gold/green-to-gold-active-duty.html

For more information on the 25th ID CG Hip Pocket Scholarship, 25th ID Soldiers should speak with their unit leadership