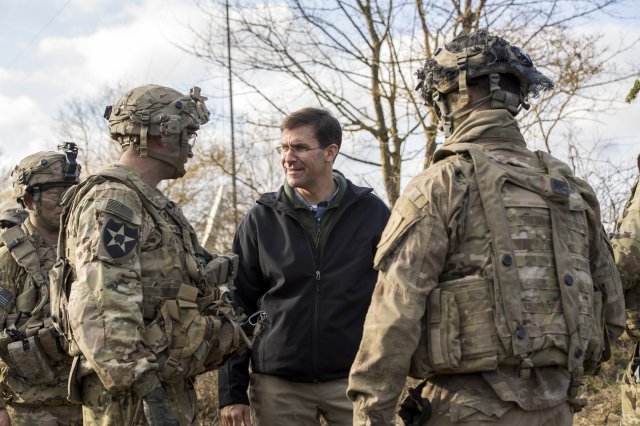 FEBRUARY 8, 2018, Washington D.C. – The Army is taking a hard look at the number of Soldiers who are designated as non-deployable and possibly reducing the frequency of permanent-change-of-station moves, said Secretary of the Army Dr. Mark T. Esper.

Esper spoke Tuesday at the Pentagon during a meeting with representatives of military and veteran service organizations.

Before his remarks, Esper also thanked MSO/VSO organizations for work they do advocating for Soldiers and families on quality of life and readiness issues.

The organizations also share the Soldier story with the American public and lawmakers, most of whom have never served and know very little about issues that are important to Soldiers and the Army, he added.

NON-DEPLOYABLES
The high number of non-deployable Soldiers, currently at about 100,000, is “hurting Army readiness,” Esper said.

A non-deployable Soldier is one who, for any number of reasons, is restricted from worldwide deployment where he or she would perform their unit’s core designed or assigned mission.

A business would not survive if 10 percent of its workforce could not perform its core mission, Esper said.

Too many non-deployable Soldiers is also a health-of-the-force issue, Esper said. For every Soldier who cannot deploy, someone must take that person’s place, and that puts a strain on an already over-deployed force.

Getting non-deployables transitioned out of the Army is “an approach I hate to do,” but it has to be done, he said.

Having said that, Esper noted that the Army will do everything it can to help get as many Soldiers as possible changed to a deployable status.

For some, it may be very easy to do, he said, and might include something as simple as getting dental work done. For others, however, there’s no easy fix, he said. Many are on extended profiles and will never be able to deploy.

The Army is also taking some proactive measures to reduce the number of Soldiers who get injured in the first place, he said.

For instance, the Army is changing its physical fitness program to focus more on functional movements designed to strengthen the body in ways that reduce injuries, he said.

The Army is also looking to provide physical trainers at the small-unit level to provide better coaching on fitness and injury prevention, he offered.

PCS FREQUENCY
Many Soldiers are PCSing every two or three years, Esper said.

In an effort to keep their kids in school or hang on to a good civilian job, some families have opted for the Soldier to become a “geographical bachelor,” he said.

In addition, frequent PCS moves hurt team cohesion. As an example, Esper said it would be difficult for a football team to win games if there was a 30 percent turnover on its roster each year. Similarly, with overly-frequent PCS moves, it becomes hard to build cohesion inside military units.

Still, Esper said, a PCS move can be good for a Soldier’s career growth. In the private sector, for instance, it’s a given that to climb the corporate ladder, one has to move on or stagnate, he said.

So the issue of PCS moves is multifaceted, Esper said. Any change will have to be studied carefully.

One solution, he said, might be to offer Soldiers a choice of staying put or moving. Those who move might further their careers more than those who stay, but those who stay might have some compelling reasons to do so, such as caring for a sick relative, he said. For them, staying put would boost morale.

DEPLOYMENTS
Esper also touched on a number of other issues, including deployments.

The secretary, himself a retired Soldier, said that more people today are deployed than when he served in the Army three decades ago. The American people don’t really know that, he said, because with service in Iraq and Afghanistan down from what it was, the public thinks there are fewer deployments.

The secretary acknowledged that deploying too frequently takes a toll on family life and also impacts retention.

While the Army is in a period of growth and met its recruiting mission last year, it will take time for the numbers to increase. Once the size of the Army is sufficiently increased, that should reduce the frequency of deployments Soldiers experience, he said.

In the meantime, the Army is examining certain missions around the world and asking hard questions about the size or necessity of continuing those missions, he said.

The Army is also looking at increasing home-station training times, he added.

BUDGETARY IMPACTS
Another topic the secretary dwelled on for some time was the budget process.

Reservists in particular felt the impact of the last shutdown, he said. Many Reserve Soldiers missed work at their civilian jobs so they could go train. They then learned that with the government shutdown, they would miss training as well. That can’t be good for readiness, Esper said.

The MSO/VSO attendees told the secretary that they would try and carry that message to the American people and to Congress. The secretary thanked them for their support to Soldiers.