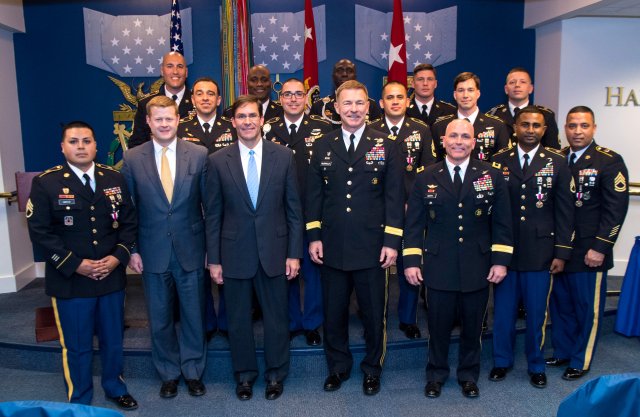 FEBRUARY 6, 2019 – Traveling about half the time of the year as a recruiter, Staff Sgt. Jon McCoy heavily relies on his wife to take care of their toddler and home.

“The whole reason why I’m here is the support that my wife is able to provide,” he said Monday afternoon before a ceremony at the Pentagon to honor some of the Army’s best recruiters.

Stationed at Joint Base Lewis-McChord in Washington, McCoy is one of two warrant officer recruiters who handle the western region from Colorado to as far as South Korea.

While he may rack up some frequent flyer miles during his travels, he also gets numerous Soldiers to stay in the Army or troops in other branches to join it.

In the first quarter of fiscal year 2019, McCoy had 150 individuals continue their careers as warrant officers in the Army — about one-third of all warrant officers boarded during that time.

Army Secretary Mark T. Esper honored McCoy and 12 other recruiters for their efforts this past quarter.

“Readiness remains the Army’s top priority. Don’t doubt that. And you can’t achieve readiness without the right people,” Esper said. “It’s our recruiters serving across the country who are finding our nation’s best and brightest to join our ranks.”

Accessions are also now a crucial priority after Esper recently directed the Army’s recruiting efforts to modernize and give recruiters the resources they need to connect with qualified applicants.

Improvements to marketing and a larger presence in 22 target U.S. cities are also underway to bring greater awareness to the opportunities found within the Army.

Before the ceremony, Esper said he spoke to the group of recruiters and listened to their challenges and how they overcame them.

“The key to success is simple,” he said they told him. “It takes passion, it takes commitment, it takes honesty and transparency. That’s what America’s youth are looking for in a recruiter. That’s what their parents, their pastors, their counselors expect of us.”

Born and raised in Guam, Sgt. 1st Class Jesse Lujan works as a recruiter in Hagatna at the same station where he chose to enlist in the Army about 15 years ago.

Lujan, an aviation operations specialist, was able to sign up 19 recruits this past quarter.

“I’m able to relate to them and let them know that there’s more out there and that the Army is a stepping stone to help you get there,” he said.

He also strives to be a positive member of his community. He often volunteers to help his daughter’s Girl Scouts troop, joins in cleanups of the coastline, and helped collect $2,000 worth of items as part of relief efforts for Typhoon Mangkhut, which hit Guam in September.

“We’re just not there to recruit and bring people in,” he said. “We actually give back anytime that we can get.”

About 10,000 recruiters are spread out over 1,400 locations around the world, said Maj. Gen. Frank Muth, commander of the Army Recruiting Command.

“These recruiters here stand in the trenches everyday as the face of the Army,” Muth told the audience. “Their accomplishments this past quarter is a testament to their professionalism, dedication and laser focus on the mission.”

Being a recruiter still remains a difficult task to ensure the Army fills its ranks with quality applicants.

Only 29 percent of today’s youth are able to meet the minimum requirements to join the service, Esper said, and only 4 percent of them have the propensity to serve.

On top of that, the service is up against the greatest economy in decades, he said.

“This is a challenge that we must overcome,” Esper said. “We have no other choice. Failure is not an option.”

But that task should not rest solely on the shoulders of a few, he said, adding all Soldiers need to educate people on the opportunities the service offers.

“Recruiting is everyone’s responsibility,” he said. “It’s the Army’s mission, not just ours. We are all recruiters.”