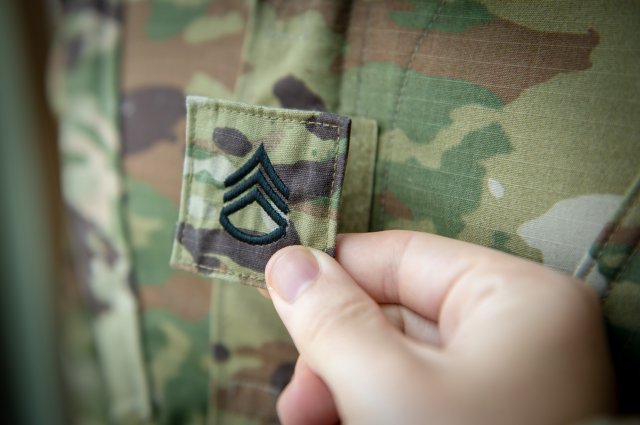 APRIL 22, 2019 – The Army is revising its centralized promotion board processes to deliver “the right person, at the right job, at the right time,” according to Army G-1 officials.

The effort centers on a transition from time-based to merit-based policies and practices. Further, the change ensures that the best-qualified Soldier will be the first one eligible for promotion, Purcell said.

Soldiers in the active component and those serving in an Active Guard Reserve capacity will be impacted by the change.

“This is the first major overhaul to our enlisted centralized promotion board in the 50 years we’ve conducted them,” said Sgt. Maj. of the Army Dan Dailey. “We will see a number of benefits with these changes, but the most important one will be the impact to readiness.”

“We will retain our most talented NCOs, and better project force structure requirements by promoting the right people at the right time,” he added.

“This change now truly rewards the most qualified Soldiers who are seeking advancement instead of simply promoting people based on seniority,” Dailey said.

Dating back to 1969, centralization was designed to fill the Army’s ranks with qualified Soldiers, provide guidelines for career progression, and attract and retain high-caliber personnel, according to Human Resources Command officials.

Under the current system, HRC could “forecast” the Army’s force structure by anticipating the number of Soldiers leaving the force in all grades and career fields — sometimes 24 months in advance, Purcell added.

Long-range projections, however, failed to be an effective means to react to emerging requirements. The Army would have to wait for a new promotion cycle to identify and allocate additional personnel, he said.

Reductions or changes to the Army’s force structure would result in a surplus of promotable Soldiers, Purcell added. Under the current system, if a Soldier was in good standing and identified as promotable — annotated by a “P” status from HRC — the force was required to promote.

“From a readiness perspective, we are creating a process that reacts to emerging requirements, and it stops us from creating skill and grade imbalances. It produces an environment where there is no promotion stagnation … or we are forced to separate people because they are in excess to requirements,” Purcell said.

MERIT-BASED PROMOTION
The original promotion system now generates an order of merit list, or OML, which is used to select Soldiers for promotion. The number of Soldiers promoted relied heavily on the Army’s annually-projected force structure rate, Purcell said.

After the Army selected a Soldier for promotion, HRC would assign them a promotion-sequence number. The force would determine this number by a Soldier’s seniority — their time in grade, time in service, and date of birth, Purcell said.

“If the best candidate happens to be sequence No. 400 out of 500, based on time and grade — that’s not rewarding and recognizing talent,” he said.

The transition to a new promotion system starts this fiscal year, with the master sergeant promotion board, he added, by changing how sequence numbers are informed by OML standings.

Eventually, under the revised system, the Army will conduct annual reviews of the NCO corps and maintain an OML for each grade and military occupational specialty, Purcell said, adding the OML will no longer be used to generate an annual promotion list.

Instead, the OML will evaluate the force and determine Soldiers who are “fully-qualified” to promote. From there, the Army will employ a merit-based rating system to order the OML sequentially.

“The vast majority of the NCOs are, in fact, fully qualified to promote,” Purcell said. “Fully qualified is a retention standard — it’s not about promotion.

“I could have an OML of a thousand individuals, and 990 could be fully qualified,” he added. “The promotion demand might be 40. In this case, the best 40 records … would be identified [for] promotion.”

In turn, the Army will now be able to manage its talent better, subsequently improving professionalism and leadership development throughout the NCO corps, Purcell said. Further, the Army will use the OML to inform assignment decisions, such as crucial development and career broadening opportunities.

“We are calling this a talent management effort,” he said.

Additionally, Soldiers will have access to their OML standing by grade, career progression, and MOS through the Army Career Tracker website, Purcell said. This change should be available in the next few months.

“It will be a private and secure automated link from the Army to the individual, and no one else will have access to it,” Purcell said. “Soldiers can go into the Army Career Tracker and can share that information with a mentor or a leader if they so choose, but they’re not required.”

On the other hand, if Soldiers perform subpar and are unable to become fully qualified in their respected rank, the revised promotion system will provide them with a notice, Purcell said.

The first time a Soldier fails to become fully qualified, HRC will advise him or her that continued service may be at risk, he said.

Once a Soldier is found “not fully qualified” by a board a second time in the same grade, then the Army denies continued service. The Army will establish a mandatory separation, six months into the future.

This system is slated to be implemented by fiscal year 2021.

“There is a place for everybody in the Army as long as you are performing,” he said. “At the point when it is determined that you are not contributing to the team and essentially drawing a paycheck, then we’re going to inform you that your service is at risk. If it continues … then we are going to tell you your tenure with the Army is over. This sets conditions to eliminate archaic time-based retention control points.”

MONTHLY PROMOTIONS ACROSS ALL RANKS
Slated for fiscal 2021, the Army will post a 90-day promotion forecast for all NCO promotions, from sergeant to sergeant major, and implement a monthly-promotion selection process.

If a Soldier is fully qualified to promote by completing their mandatory professional military education — and in good standing with the Army — they can monitor these quarterly-promotion windows through the HRC website. Based on their OML standing, a Soldier can then estimate their date of promotion.

Further, HRC intends to announce the names of all Soldiers selected for promotion on the 15th of each month, with an “effective promotion date” on the first day of the following month, Purcell said. Announcing on the 15th will give Soldiers a two-week notice of their promotion selection.

Likewise, the biggest challenge will stem from the cultural shift created by the revised promotion system.

“In the past, when a Soldier was selected they were considered ‘promotable,’ assigned a sequence number, and waited to get promoted,” he said. “Now, a Soldier’s promotion will be based on their OML standing and needs of the Army.”

DISTRIBUTED LEADERS COURSE
To be eligible for promotion, Soldiers are required to complete the Distributed Leaders Course, Purcell said.

In the past, some Soldiers did not finish the online course before a board convenes. Currently, there is a Department of the Army policy to suspend promotion eligibility for specialists and sergeants who fail to complete this mandatory DLC training, he said.

By fiscal 2021, the Army will expand this policy to all applicable ranks through master sergeant.

THREE-PHASED APPROACH
Over the next three years, the Army is projected to implement its revised centralized promotion system. Below is a list of milestones the Army hopes to attain:

“If you excel at what you do, we’re going to promote you,” Purcell said. “Everything is predicated on everybody doing what they’re expected to do — leaders and Soldiers alike. We’re trying to create an environment to facilitate all of that.”