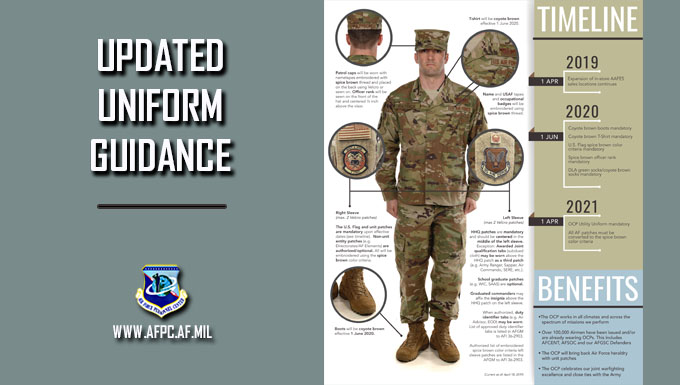 With its origins around 1917, the term “camouflage” was coined to describe what British and French soldiers were doing when they used surrounding foliage to hide their encampments from enemy aircraft. It was not just the word “camouflage” that was new, but the idea itself became a necessity for survival on the modern battle field.

For the past 100 years the U.S. military has been developing various forms of camouflage, not just to cover equipment, but to provide concealment for individual soldiers in the field.

Members of the Iowa Air National Guard were recently issued their first few sets of the Air Force’s newest camouflage uniforms dubbed the “Operational Camouflage Pattern”. The OCP is the latest iteration of camouflage adopted for use by the U.S. Army and Air Force. The recent “roll out” of the OCP is about one year shy of the Air Force’s mandatory wear date for the new uniform.

The hundredth anniversary of the term “camouflage” passed quietly in 2017 as some 185th Air Guard members first began receiving new OCP uniforms in preparation for their “Reserve Component Period” deployments.

Gill said after the 2017 deployment requirements were met there were still about 400 unit members from the 185th who needed the newer OCP uniforms. With the April 2021 deadline approaching, the National Guard Bureau directed the “roll out” of the OCP uniform for all remaining Air Guard units this past month. Gill said the 185th was one of 49 units that had a number of members who had not yet received any OCP uniform items.

“They (NGB) said they had an idea of how many OCPs we had on base, so that’s how they based how much money they were going to give us to purchase new uniforms,” said Gill.

The OCP is replacing the Airman Battle Uniform that has been worn in the U.S. Air Force throughout the past decade. The ABU was originally created to provide a service distinctive look for members of the Air Force, but U.S. military operations determined that the ABU was an ineffective camouflage.

The recent RCP deployments had 185th unit members spread throughout the Central Command area of responsibility, just as the OCP was initially being fielded. The large geographical area that makes up CENTCOM covers West Asia, the Persian Gulf region as well as parts of North Africa. A major consideration for adopting the new camouflage was that the OCP had already been developed by the U.S. Army to blend with the environments within CENTCOM.

Select Airmen have been wearing the OCP since 2012 depending on operational needs and requirements at their deployed locations. The decision to make the OCP the standard issue uniform for every Airman at all locations came in 2018. By the end of 2019 all Active, Guard and Reserve Airmen attending basic military training at Lackland Air Force Base began receiving the new uniform.

This month, new OCP uniforms have made their way to the last remaining Airman who still needed to be outfitted. Uniform items that were issued to Airmen in Sioux City include OCP coats, trousers and a hat as well as new pair of “Coyote” brown boots, tee shirts and name tapes.

Before Airmen took their small cardboard box containing their OCP starter kit, they used their ID card to digitally sign for their items, putting a modern twist on military clothing issue procedures. Unit members were also encouraged to look over their items to ensure a good fit.

“We want them to check to make sure their size is good, make sure their name tag spelling is correct and that their rank is correct,” said Captain Trish Theisen who works as the unit’s Installation Deployment Officer.

Unit members were assured that additional uniform items like a matching cold weather jacket and a cold weather cap will be supplied as money and supplies are available. Theisen added that Airman who are scheduled to deploy will receive everything they need, like additional sets of uniforms as well as outer wear, depending on their deployed locations.

Terms that have been used through the years to described different kinds of camouflage like “Tiger stripe”, “Woodland” and even the short lived “Chocolate Chip” may be relegated to the past. Future terms like “light bending” or “cloaking” have already entered the American dialect as developers forge the next one hundred years of military uniforms. Whether the term “camouflage” itself falls from the vernacular will be determined by future technology and even how future battles are fought. For now many 185th Airmen expressed their appreciation for their new Operational “Camouflage” Pattern uniforms.