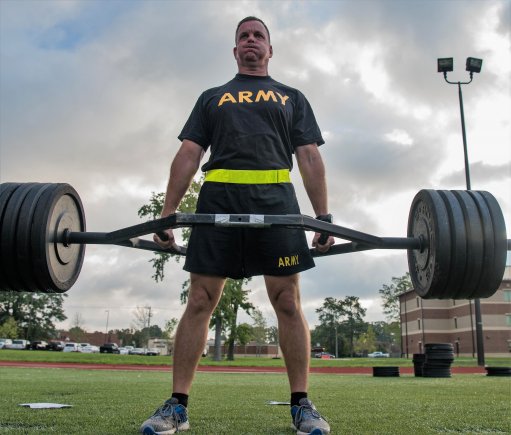 SEPTEMBER 27, 2018 – The Army’s most important weapons system is the Soldier. To overmatch the enemy in multi-domain operations, Soldiers must demonstrate physical fitness levels required for combat.

“At the end of the day we need Soldiers who are deployable, lethal and ready,” said Secretary of the Army Mark Esper during a Defense Writers Group breakfast in August.

The age- and gender-neutral ACFT is part of the Army’s evolving Holistic Health and Fitness System to generate lethal Soldiers who are physically ready and mentally tough.

The ACFT and how it nests into the Army’s Holistic Health and Fitness initiative, or H2F, is the focus of a Warriors’ Corner during the Association of the United States Army’s annual meeting in Washington, D.C. The “Role of ACFT in the Holistic Health and Fitness System” takes place Monday, Oct. 8, 5:15-5:45 p.m. Eastern time, at the Walter E. Washington Convention Center.

Frost will present at the ACFT Warriors Corner, with CIMT’s research physiologist Whitfield “Chip” East on hand as a subject matter expert. (CIMT is the Army’s H2F proponent.) Frost will outline the road to the ACFT, how the ACFT nests into H2F, how physical fitness is a readiness enabler, and the fielding of an updated Physical Readiness Training field manual that will be renamed Holistic Health and Fitness (FM 7-22).

The ACFT role in H2F will also be the subject of TRADOC’s Army Exhibit kiosk during the AUSA meeting Oct. 8-10. Subject matter experts will be on hand and attendees can use ACFT equipment to test their abilities on several of the ACFT events.

BACKGROUND
The Army announced in July that the ACFT will become the physical fitness test of record no later than October 2020. The test complies with the 2015 National Defense Authorization Act without differential standards or evaluation by gender.

Pilot testing took place 2017-2018, when the test was originally known as the Army Combat Readiness Test. The Army used the pilots to validate the order and direction for the individual events to ensure the ACFT can be used Army-wide.

During field testing, the Army will collect feedback from the field, procure and field ACFT equipment, and validate test administration instructions, minimum time standards and current scoring. The data will support future policy-related decisions such as potential alternate events for Soldiers with physical profiles.

The Army will also determine whether to administer the test based on unit occupational physical demands or by a Soldier’s military occupational specialty. Approximately half of the units participating in the field test will use unit-type scoring and the other half will use MOS scores.

The Army recently released an ACFT field testing manual and ACFT training guide with exercises from FM 7-22 to help Soldiers successfully prepare for the test anytime, anywhere. Soldiers should already be training in the FM 7-22 strength and conditioning requirements, East said.

“The test measures all components of fitness and the best way to do well on the test is to train and prepare all of your body’s energy and performance systems,” East added. “That means not only working right, but eating right, resting right and being mentally prepared.”