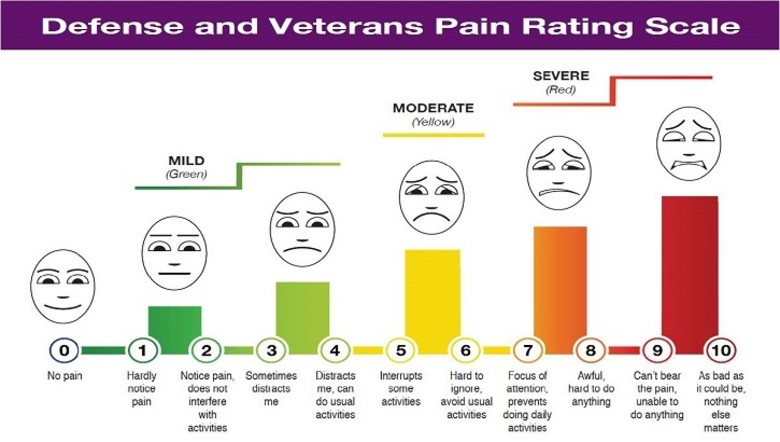 SEPTEMBER 20, 2019 – From the soldier returning home with a battlefield injury to the school teacher suffering from headaches, pain is a normal concept for daily life. This makes understanding and managing pain a priority for health care providers like those in the military health system.

The Department of Defense launched a pain rating scale for use in hospitals to better assess pain in patients. The Defense and Veteran’s Pain Rating Scale improves older pain assessment techniques by measuring not only the intensity of pain but its impact on daily function as well. The scale combines a 0-10 pain scale with facial expressions and colors to express pain intensity. The scale adds supplementary questions to determine the effects of pain on a patient’s daily functions like activity, sleep, mood and stress.

Dr. Chester Buckenmaier of the Uniformed Services University is excited about the scale, emphasizing that the effects of pain on daily function should be a focus for doctors.

“This is a cultural change that we’re bringing, not only to our patients but also to ourselves as clinicians,” Buckenmaier said. “The goal of pain management isn’t exactly getting pain down to zero but optimizing both physical and emotional function.”

Buckenmaier explained that previously, doctors focused primarily on lowering pain intensity, which often resulted in the prescription of opioids. While these medications were helpful, they could also, very easily, keep a patient on a couch rather than living a full life.

“This is what our patients are telling us,” Buckemaier said. “When they became dependent on these medications and their daily functions are actually disturbed, they came back and told us that we need to do something different.”

Serving as an anesthesiologist and licensed acupuncturist, Buckenmaier noted that the pain rating scale and new ways of looking at medicine open doors for an easier way to assess pain and for better prescribing of medications or treatments for pain. He stated that the new scale can be used to explore pain management techniques that have been around for millennia, such as acupuncture or massage alongside prescribed drugs.

“It’s not to replace opioids; it would be a mistake to think so,” Buckenmaier said. “I would hate to deploy to the modern battlefield without these tools in my toolkit, but we’re educating the next generation to look at these other modalities, like yoga and biofeedback, as complements to medicine, too.”

While treatment steps after diagnosis are important, the initial pain assessment is also integral to properly treat and manage pain. This is the reason why Buckenmaier put a specific emphasis on communication and education between patients and health care providers.

Buckenmaier encourages providers to educate and familiarize themselves with patients but also tells patients to self-educate through the numerous resources available on combating pain.

“We want to empower patients to ask questions and educate themselves on what’s out there,” Buckenmaier said. “If you think a treatment won’t work for you, talk to your doctor about that or seek additional opinions.”

As far as the future of pain management in the military, Buckenmaier is hopeful.

“I’m very pleased with the leadership in the military to see that we’re adopting these new scales and reframing what we’re looking at as successful pain management,” he said. “I think that we’re going to be leading the nation pretty soon in that respect.”